The Student Council held an amazing meeting this term. On the agenda were reports from curriculum leads Maths and English, Health and Safety, Charity and Safeguarding, which the students on the Council took control of and then reported their interviews back to the council.

Health and safety was produced by Tyler-Lee after an interview with the site Manager of St Luke’s. Tyler reported back that weekly fire tests take place, daily site checks of the whole School and the School grounds, twice daily deep cleans and a constant check up on classroom PPE to ensure the safety of all Students and staff.

English and Maths reports were completed by Ben Osmond. Ben explained that in English Year 9 were working hard on a variety of genres, linking to books. These included stone cold- all about teenage homelessness, Framed- about Art theft which led to some wonderful discussions around graffiti and if it is really art and finally the BFG- which led to aspirations of the future.

In Year 10 they focussed on Lord of the Flies and Romeo and Juliet, all the students had great fun making up their own Shakespearean slurs and turning some scenes into modern English!

Finally, Year 11 are continuing to work hard on past GCSE papers.

Ben discussed how great Year 9 are doing in Maths, completing 8 assessments to be examined, resulting in an official certificate for each student.

Year 10 are working well on their functional skills and for year 11 it’s the first year for GCSE’S and they are working incredibly hard on past papers, Mrs Norris is very pleased.

Tyrese Wilkinson reported back on Charity work and Safeguarding.

Tyrese talked about his class and that they are currently making some beautiful resin plant pots to sell to Staff to raise some money. Tyrese talked about future charity events he would like to happen, including School Disco’s and fun days to raise funds for the School.

There have been some changes this term within safeguarding. Miss Potter has stepped in as DSL and Mr Pollok has taken on the role as DDSL. The School have just had a safeguarding audit which resulted in some great feedback, Miss Potter was very pleased with this.

Tyrese reported back to us that the safeguarding team have been working with the Police around county Lines in our community and what to look out for. This term there is a big focus on harassment, racism and bullying.

Our next meeting will take place on Thursday 15th July @2pm. 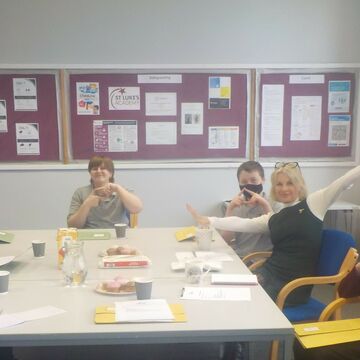